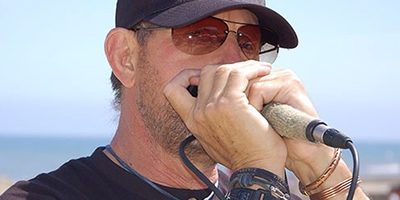 For many years, Bene has been writing, producing and performing Synth centered Ambient Dubbed-up Prog Rock with his long term Sembalance project.  On hitting his ½ Century, a novelty birthday present (one with 10 holes and 20 reeds) initiated a radical shift from electronica to something much more organic.

The Harmonica was incorporated immediately into his experimental electro-soundscapes. Bene soon developed into a real passion for the Diatonic Harmonica; playing in rock and roll cover bands, open mic/jam nights, guesting in various bands, playing solo festival sets, busking on the street, in the mountains, by the sea or anywhere else opportunity presented itself.

In March 2016, theYonberg D1 arrived, which inspired Bene to develop his solo/busking act. The comfortable power of the D1 was the key to this, shaping the sound and pushing the limits of what could be achieved with little more than a harmonica, a microphone and a sturdy pair of boots.