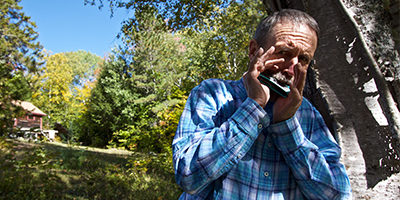 Jamy Lasell was born in 1951 and raised in the USA in Maine. He started playing harmonica on a challenge from his mother. She would play Jamy and his siblings a tune and the first one to play it back would get a dollar.  Mom claims that Jamys’ brother beat him to the dollar, but Jamys’ reward was to keep playing the harmonica and he has been playing ever since. He was introduced to the blues and Little Richard at age 12, followed by the Rolling Stones and the Chicago/Delta Schools, and in his late teens to the Piedmont style blues.

In his 20’s and 30’s he lived in the Maine woods without electricity and with little access to music.

Finally, he met a group of musicians and they started what has turned into a 40 years collaboration of live music.  He was by this time living and working in New Jersey, playing weekly at a club called Hat City Kitchen and in other bars in the area.  As Jamy got older, he drifted away from the harmonica and picked up any available instrument to play with the band.

Flash forward to many years later, at the age of sixty, when he walked into a local club, saw people playing harp, told himself he could do that, and again picked up the harmonica. Being wealthier than he had been in his teens, this time he invested in better equipment. Whereas men of his age often buy sports cars, Jamy bought harmonicas. He tried every brand he could find, but ended up with a motley assortment of harps, mics and amps.

When a friend in his small harmonica club showed him the Yonberg website he decided to try one and the rest is history.  He had found his instrument.

His double set of harps is always ready for a night out, first line ready, backups right behind them. He is not done rocking yet and is headed back to the recording studio this year.  Remember that name!