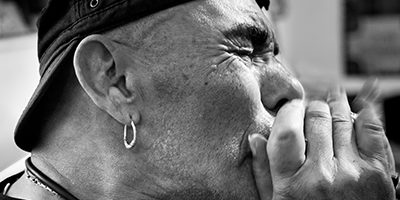 Jean-Claude Perret, aka KOKO HARP, is a self taught Blues, Folk-Blues and Rock harmonica player.  He discovered his favorite style, the Blues, by listening toSonny Boy Williamson, Little Walter, and many harmonica greats.  He started on stage in the early 80’s and his first steps with harmonica were on!

In September 2016, with his band FABULOUS KOKO BLUES, he played at the Festival Chom’ Blues, at Chomélix – France, with Little Bob Blues Bastards headlining.

He hopes to meet you sometime at the crossroads, to share his music and to bring  you long-lasting musical thrills.